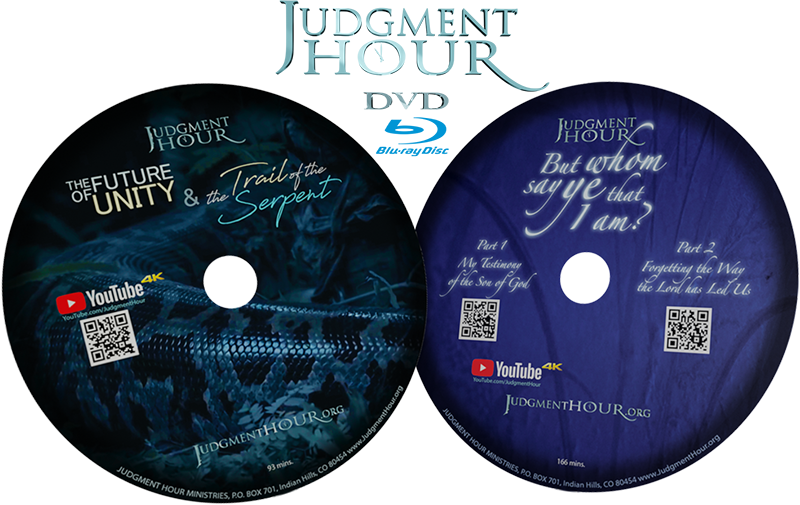 After the release of “The Future of Unity & the Trail of the Serpent” there have been many requests for DVDs of videos produced by Judgment Hour. By God’s Grace and with the generous financial support, the equipment and software necessary to produce these discs was acquired.

After many many setbacks and problems with wrong deliveries, faulty hardware and software problems as well as technical issues and setbacks getting an online store setup, I’m happy to say Judgment Hour is finally ready to receive orders. Thus far, “The Future of Unity & the Trail of the Serpent” and the two-part series “But Whom Say Ye That I Am” are both available on DVD and Blu-ray disc formats. While low resolution, DVDs are great for sharing as many people have DVD players. Blu-ray discs are High Definition (1080p) and are therefore optimal and especially great for projecting on a wall or large TV for group settings so long as you have a Blu-ray player.

The response from these videos has been overwhelmingly positive. Several who have been Adventists for many decades have said they have seen hundreds of videos on these subjects, but these three videos produced by Judgment Hour were said to have been inspired and the best they’ve ever seen. All praise and honor be to the Father and Son! It is a blessing to hear from several whose eyes have been opened to see and understand these issues. God is working mightily to set this light before His people, and the encourage those who have accepted this light to step out in faith and proclaim it boldly. In the future more products will be added such as the videos from the selfless series. For now, it is my hope and prayer that these videos will be a blessing to you and to those with whom you wish to share them.

The videos may be ordered from https://www.JudgmentHour.org/store/

Volume discounts are available on the purchase page.

Today, the Judgment Hour website was finished! The construction of the website has taken about two full weeks from start to completion. The purpose in having a website is for Judgment Hour to have a public platform upon which additional content, articles and videos may be posted and shared.

Judgment Hour also has a new YouTube page (www.youtube.com/JudgmentHour) where additional videos and video announcements will be posted. The YouTube page and all video content is also available for viewing on the “Videos” page on the website.

In addition to providing a platform for content, the Judgment Hour website is intended to set forth the mission of Judgment Hour Ministries, which, in short, is to bring an end to the Great Controversy between Christ and Satan, by preparing a people to stand true to Him during the investigative judgment.

“God’s purpose in giving the third angel’s message to the world is to prepare a people to stand true to Him during the investigative judgment. This is the purpose for which we establish and maintain our publishing houses, our schools, our sanitariums, hygienic restaurants, treatment rooms, and food factories. This is our purpose in carrying forward every line of work in the cause.”  (Ms154-1902.10)

As preparing a people to stand true to Him during the investigative judgment was the purpose of Sister White and the pioneers of the church, so too, it is our purpose in carrying forward every line of work in the cause. Every video, every tract, every article and every message will be calculated and intended to fulfill this purpose.

Where do we go from here?

There are several messages God has given me to share. I am looking at a list right now of 14 different video projects. Some of these projects are messages that illustrate the importance of a right understanding of God in order to understand, give and obey the Three Angels’ Messages. Other projects take a close look at the intentions of Lucifer in the Great Controversy and how he was masterfully able to accomplish what he desired when he said “I will ascend above the heights of the clouds; I will be like the most High.” (Isaiah 14:14) Another project will be a close look at what Seventh-day Adventists believe, versus what the Seventh-day Adventist church actually teaches. Yet, another project will include an introductory look at what exactly the differences are between those who believe in the one True God and those who profess a believe in the trinity. To those unfamiliar with the subject, it can be confusing and difficult to understand, and as a result, many justify their ignorance saying “it’s a mystery!” Other projects on my list include testimonies of other Seventh-day Adventists who have re-discovered the faith once given to the saints and their experiences, and yet other short videos about specific questions like, “Is Jesus God?” and “Did Ellen G. White change her view of God?”

One project that was started a few years ago is the selfless series. This series chronicles the Great Controversy as seen through the two antagonistic principles of selflessness and selfishness, and how ultimately, the Great Controversy is brought to an end by a revelation of God’s selfless character in His people through the medical missionary work. Ellen G. White wrote “The student should learn to view the word as a whole, and to see the relation of its parts. He should gain a knowledge of its grand central theme, of God’s original purpose for the world, of the rise of the great controversy, and of the work of redemption. He should understand the nature of the two principles that are contending for supremacy, and should learn to trace their working through the records of history and prophecy, to the great consummation. He should see how this controversy enters into every phase of human experience; how in every act of life he himself reveals the one or the other of the two antagonistic motives; and how, whether he will or not, he is even now deciding upon which side of the controversy he will be found. {Ed 190.2} Two of the slated six episodes are already finished and can be viewed on the videos page or on the selfless series page.

As a filmmaker with many years of experience in producing, directing, cinematography, editing, color-grading and 3D animation, it is my hope to make these videos clear, concise and easily understood — and a big part of making that possible, is through visual illustrations that help to make complex subjects easier to understand. Utilizing 3D animation, graphics and other means, the mind is more easily able to grasp the lessons and principles shared.

In addition to these projects, I have in mind another project for creating an online media resource to help those unfamiliar with the Truth about God to find quick answers to their questions. Beginning a search for Truth about this subject of the Father and Son can be a daunting task, especially when it comes to finding important Bible passages, searching through thousands of pages of Ellen White’s writings for answers to simple questions, or when it comes to trying to understand what the pioneers of the Adventist church believed. Currently, there is not really an efficient way for others unfamiliar with this subject to find quick and clear answers to their questions. A well organized online media resource I believe can help alleviate the difficulty and open many minds to the Truth much faster.

Finally, one project that I know is desperately needed, is a feature length documentary on the subject of God. While many people are endlessly confused about the theology of the Father and Son, one thing that I find often brings clarity to the subject, is the history of how the trinitarian view of God came into the Seventh-day Adventist church. In the late 1800s the medical missionary work was going forward, the loud cry was beginning to sound, and Satan was at work in the most insidious ways to derail the forward progress from culminating in the coming of Christ. And sadly, he was successful. He was instilling those at the head of the medical missionary with selfishness and leading them astray into false understandings of the presence and personality of God; even leading them to depart from the fundamental principles God had given to the Advent movement. Warnings were given and warnings were disregarded. The judgments of God were falling upon Adventist institutions in the form of destructive fires that men could not quench. The living prophet of God was receiving warnings from Jesus, being awakened in the night she said, “that night I was up at one o’clock, writing as fast as my hand could pass over the paper.” (1SM 206) The Church was about to be split, but God spoke and preserved them from shipwreck. Five months before her death, Sister White warned “I tell you now, that when I am laid to rest, great changes will take place.” {Ms1-1915.2} And the following years and decades would bear out the truthfulness of that warning. After her death, conspiracies developed, secret Bible conferences were held and Satan was astir, using unconsecrated men to bring into the church doctrines from Babylon. Good men fought against these efforts, but the theology of the church was changed, subtly, deceptively. Not through long nights of prayer and fasting and study, but through underhanded efforts, coercion, and even by editing the writings of the pioneers after their death and removing sentiments that were disagreeable to their new ideas. Could the rich history and story of the Seventh-day Adventist movement be laid plainly before all, eyes would be opened, and many would discern the error of the popular course now pursued in direct opposition to God’s leading and teaching. Said the inspired messenger, “we have nothing to fear for the future, except as we shall forget the way the Lord has led us, and his teaching in our past history.” {RH October 12, 1905, par. 22} Satan hates no other people on Earth more than Seventh-day Adventists, because “the most solemn message ever committed to mortals has been entrusted to this people…” (2T 450.3) The eyes of the world and even of Seventh-day Adventists need to be opened, and could they see, plainly laid out before them “the way the Lord has led us, and His teaching in our past history,” they would be horrified to see where they now stand.

The First Angel’s Message proclaims “the hour of His judgment is come” and we know “the time is come that judgment must begin at the house of God:” (1 Peter 4:17) The Three Angels’ Messages in their undiluted and beautiful Truth must be given to modern Israel and to the world that the Great Controversy may be brought to a close — and this is the endeavor of Judgment Hour. It is our objective not to become distracted with all manner of ideas and philosophies, but to teach, preach and do the very things we have been counseled to do, in order to bring this celestial war to an end.

These endeavors all require a great deal of prayers and financial support. I am starting Judgment Hour and moving forward in faith. He has shown me clearly this is His leading and it is my prayer this ministry may be a blessing to you and many others. Let us all take up the work nearest to us, and move forward with faith. Time is short — and by God’s Grace, we can make it even shorter.

“Wherefore also we pray always for you, that our God would count you worthy of this calling, and fulfil all the good pleasure of his goodness, and the work of faith with power:  That the name of our Lord Jesus Christ may be glorified in you, and ye in him, according to the grace of our God and the Lord Jesus Christ.” (2 Thessalonians 1:11-12