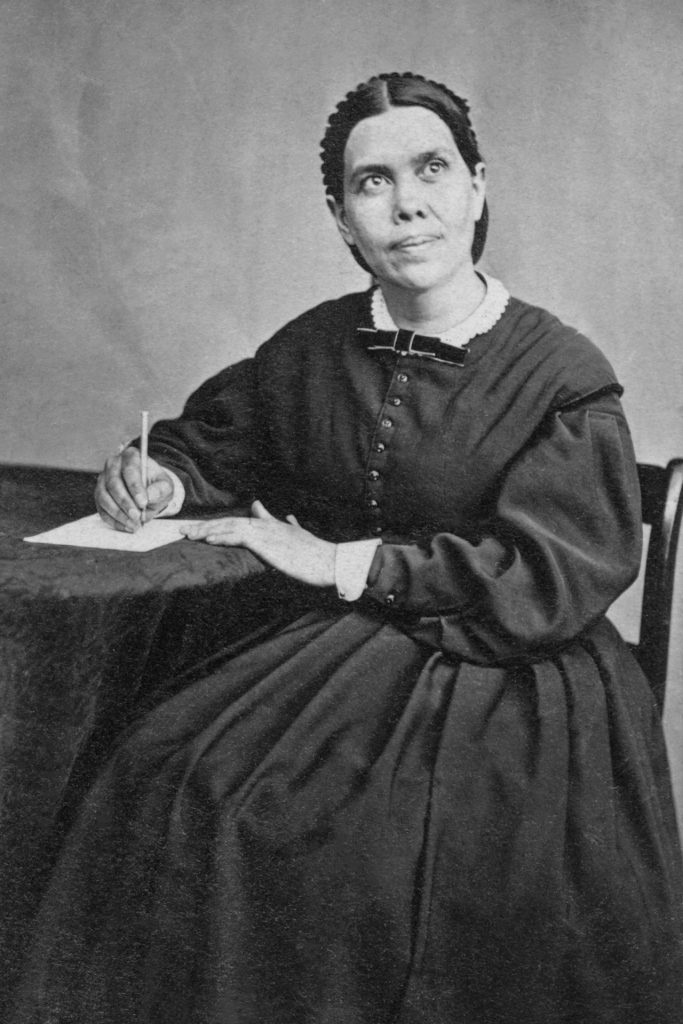 Who is Ellen G. White?

Who was Ellen G. White, and why do millions consider her writings of special value and significance?

There are many books available for purchase online about the Life and Work of Ellen G. White.

In brief, she was a woman of remarkable spiritual gifts who lived most of her life during the nineteenth century (1827-1915), yet through her writings she is still making a revolutionary impact on millions of people around the world. During her lifetime she wrote more than 5,000 periodical articles and 40 books; but today, including compilations from her 50,000 pages of manuscript, more than 100 titles are available in English. She is the most translated woman writer in the entire history of literature, and the most translated American author of either gender. Her writings cover a broad range of subjects, including religion, education, social relationships, evangelism, prophecy, publishing and nutrition. Her life-changing masterpiece on successful Christian living, Steps to Christ, has been published in more than 140 languages. Seventh-day Adventists believe that Mrs. White was more than a gifted writer; they believe she was appointed by God as a special messenger to draw the world’s attention to the Holy Scriptures and help prepare people for Christ’s second advent. From the time she was 17 years old until she died 70 years later, God gave her approximately 2,000 visions and dreams. The visions varied in length from less than a minute to nearly four hours. The knowledge and counsel received through these revelations she wrote out to be shared with others. Thus her special writings are accepted by Seventh-day Adventists as inspired, and their exceptional quality is recognized even by casual readers.

Ellen White herself noted, “The fact that God has revealed His will to men through His Word, has not rendered needless the continued presence and guiding of the Holy Spirit. On the contrary, the Spirit was promised by our Saviour to open the Word to His servants, to illuminate and apply its teachings” (The Great Controversy, p. 7).

“Last night a scene was presented before me. I may never feel free to reveal all of it, but I will reveal a little. It seemed that an immense ball of fire came down upon the world and crushed large houses. From place to place rose the cry, “The Lord has come! The Lord has come!” Many were unprepared to meet Him, but a few were saying, “Praise the Lord!” “Why are you praising the Lord?” enquired those upon whom was coming sudden destruction. “Because we now see what we have been looking for.” “If you believed that these things were coming, why did you not tell us?” was the terrible response. “We did not know about these things. Why did you leave us in ignorance? Again and again you have seen us; why did you not become acquainted with us and tell us of the judgment to come, and that we must serve God, lest we perish? Now we are lost!”
(Ms102-1904)

“The night before last a very impressive scene passed before me. I saw an immense ball of fire fall into the midst of some beautiful mansions, causing their instant destruction. I heard some say, “We knew that the judgments of God were coming upon the earth, but we did not know they would come so soon.” Others said, “You knew! Why then did you not tell us? We did not know.” On every side I heard such words spoken.”(Lt217-1904.12)

“While I was in Nashville, a scene was opened before me. A great ball of fire seemed to fall from heaven, and from it went forth flashes of light. When these flashes of light would strike a building, the building would burn like tinder. And then I heard someone say, “I knew that this was coming. These are the judgments of God that I knew were coming.” “You knew!” said another. “You were my neighbor. Why did you not tell me that these things were coming? Why did you not warn others?” (Ms154-1904.36)

“The Lord is soon coming in the clouds of heaven with power and with great glory. His terrible judgments are soon to fall upon our world. Are we doing all we can to warn earth’s inhabitants of these things? While I was in the South a few months ago, I had a very impressive dream. I seemed to see a great ball of fire come from heaven and strike the earth. Great houses were in flames, and many were looking on in great distress. Some one said, “I knew that this was coming. I knew that God’s judgments were soon to fall.” “You knew that these things were coming?” said another. “Why did you not tell us? Why did you not warn us, and show us the prophecies, that we might also know?
(Ms158-1904.30)

“There was a scene presented to me. It was the night before the Sabbath. That is when that scene was presented. I looked out of the window, and there was an immense ball of fire that had come from heaven, and it fell where they were casting buildings with pillars, especially the pillars were presented to me. And it seemed as if the ball came right to the building and crushed it, and they saw that it was branching out, branching out, enlarging, and they began to cry and mourn and mourn, and wring their hands; and I thought some of our people stood by there, saying, “Well, it is just what we have been expecting; it is just what we have been talking about; it is just what we have been talking about.” “You knew it?” said the people. “You knew it, and never told us about it?” I thought there was such an agony in their face, such an agony in their appearance.”
(Ms152-1904.21)

“When I was at Nashville, I had been speaking to the people, and in the night season, there was an immense ball of fire that came right from heaven and settled in Nashville. There were flames going out like arrows from that ball; houses were being consumed; houses were tottering and falling. Some of our people were standing there. “It is just as we expected,” they said, “we expected this.” Others were wringing their hands in agony and crying unto God for mercy. “You knew it,” said they, “you knew that this was coming, and never said a word to warn us!” They seemed as though they would almost tear them to pieces, to think they had never told them or given them any warning at all.”
(Ms188-1905.13)

What can we conclude from these warnings?

1. An Immense Ball of Fire Will Come Down From Heaven and Strike the Earth

2. This Ball of Fire Will Settle in Nashville Where they were Casting Buildings with Pillars

3. From this Ball of Fire there are Flashes of Light and Flames Going Out Like Arrows

4. The Ball of Fire & Flashes of Light will Destroy Large Beautiful Homes, Mansions and Buildings

5. The Ball of Fire comes right to the Building and Crushes it, then Enlarges

6. When this Event Takes Place, Some will think the Lord Has Come

7. Seventh-day Adventists will know this Judgment is Coming, but Will Not Give the Warning 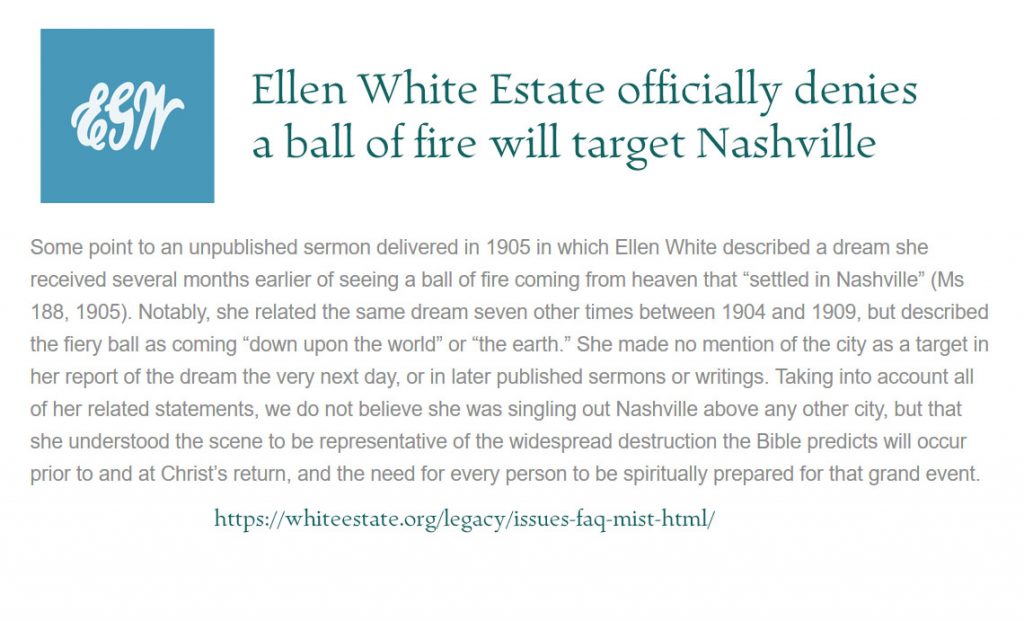 8. Those Who Did Not Know This Judgment Was Coming Will be Enraged with the Seventh-day Adventists for Not Warning Them

9. Destruction Will Come Upon All Cities One After Another

10. Nashville Will Be the First City to Receive these Judgments

WHAT SHALL WE DO?

CONFESS YOUR SINS, REPENT
& LET THE SAVIOUR IN!

BELIEVE THE WORD OF GOD 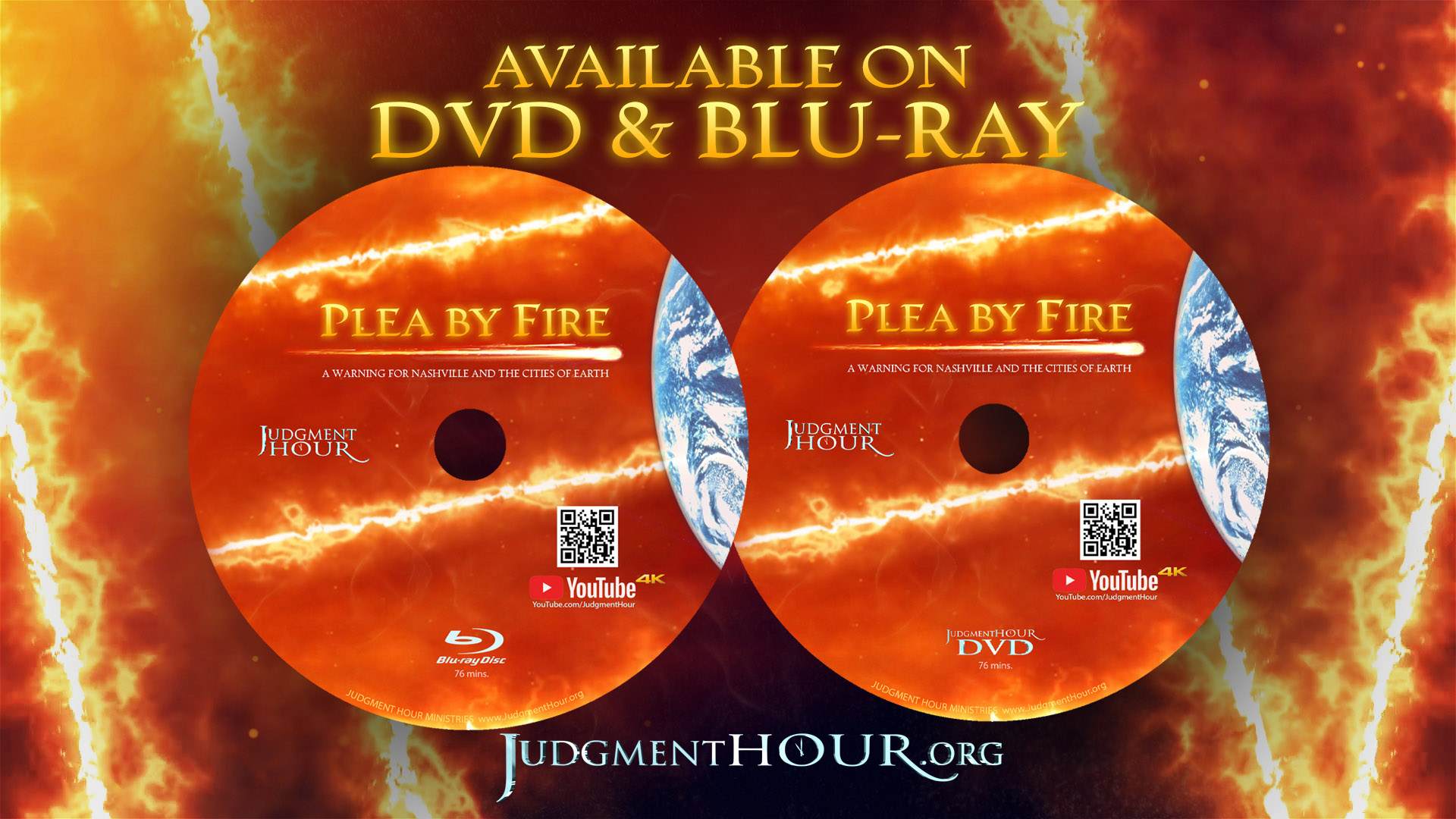